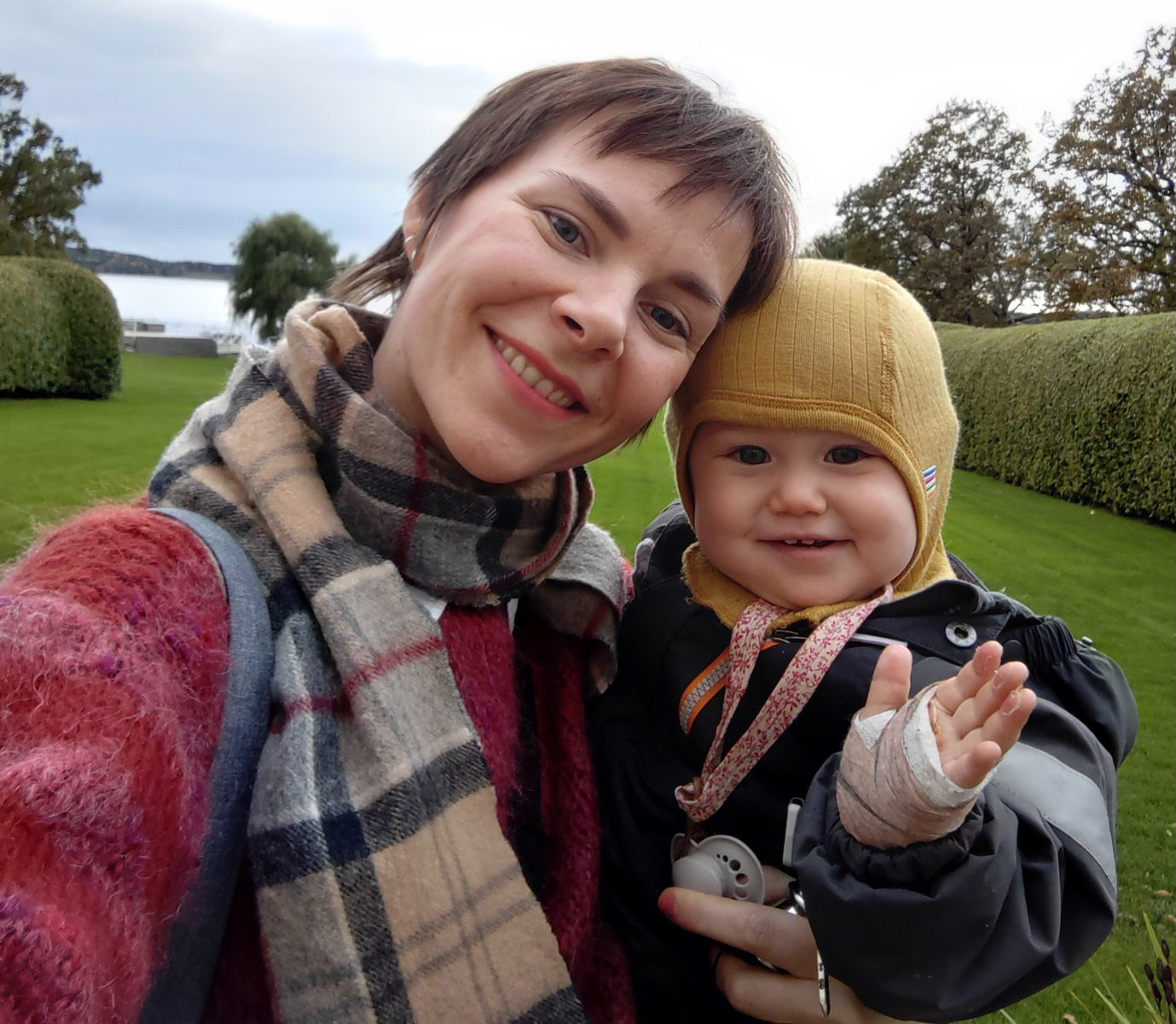 I meet the Soma Design cohort at the central station, released as everything I had planned to finish before starting the course had worked out: I wrote between six and twelve, cradled my daughter into her morning nap, fed her, showered and ate, packed different piles of organization, bent my finger and pressed send. If I would draw my shape, I’d be a brutalist building supported by a tight net of mangroves: Head and shoulders. The rest is no more than a latent ache. Do I have a body?

For the last weeks, I’ve been writing ferociously on a detailed account of my PhD project. In the meanwhile, I, my whole self, got compressed into my head, striving upwards through tense shoulders, getting stiffer by the day. My daughter’s hug became a comfort. Sensing her temperature and breath, her little fingers and eyelashes touching my skin would ease my compression. Two nearby tragedies loomed in the background, actualizing the existential theory I was writing down: The prevented deaths of my grandmother and my niece, only three months old, posed Jasperian limit situations (1932/1969) “moments of utter uncertainty when our human vulnerability is principally felt and our security is shaken” (Lagerkvist 2017, 98). But where was my power to halt and feel the void? Thrown into the mundane joggle of approaching deadlines, family demands, and ceaseless communication, I lost touch with my limits and neglected finitude.

Amanda Lagerkvist writes; “the theory of finitude par excellence is existential philosophy […]” and argues that, beyond focusing on death “there is reason to keep finitude on the radar to highlight limit and vulnerability as a corrective to figurations that invoke unbounded forces” (forthcoming). She cites Jonathan Sterne who suggests practicing responsiveness:

“No subject has unlimited energy or unlimited resources—and the same should be said of the planet. The ideology of ability suggests that the concern with those limits can be overridden, ignored. And they can be for a time—people can push themselves beyond their limits, but always with the need for recovery time, and only to a point” (in ibid.)

To live a better life by means of embodied responsiveness is where somaesthetic design and existential media theory can begin their coalitionist dance: An ethical performance in and through the situated and relational – an intracorporeal and singular-plural self (cf. Nancy 2000).

“Existential media” asserts that questions about ethics and the human condition are implicated in our technological culture. To interrogate the ways we live with digital technology, existential media studies reconceives of media as “both the priors and the limits, the frame and the edge, the building blocks and the brinks of being” (Lagerkvist, forthcoming), and argue for a need to remap the social, cultural and ethical implications of technological saturation from an existential point of view. While acknowledging the transversal location of ethics across human and more-than-human domains, ethics is above all conceived as embodied: Ethics is bodies because our bodies; our embodied experience; and embodied freedom are the fundament for a flourishing existence. That resonates with Somaesthetics design as a research program.

Somaesthetics is both a theory and ethical praxis to live a better life through cultivating our sensory perception and paying attention to our soma – “the self that is a united whole of mind and body, in which our physical being produces and affects our thinking, and our mental and emotional experiences influence physical outcomes” (Shusterman 2008 in Höök 2018, 3). Soma design invites us to examine and improve on connections among sensations, feeling, emotions, and values to actualize meaning-making and the values of self-care, empathy, freedom, and choice through emptying materials of all their connection (ibid., 12 f.). It expresses and actualizes moral virtues at once and performs ethics in situ (cf. Loke and Schiphorst in Eriksson, Höök and Shusterman et al. 2020).

Addressing ethics as performance pierces its essence as a situated capacity to act: “The ethical value of an action is what it brings to a situation, for its transformation, how it breaks society open […]. Basically the ‘good’ is affectively defined as what brings maximum potential and connection to the situation. It is defined in terms of becoming” (Massumi 2015, 11). In soma design, ethics is enacted through situating and cultivating self-care as an intersubjective value, a hyphenated phenomenon, inherently linked to responsiveness, and therein responsibility towards the other: “Somatic practices explicitly frame an ethical relationship between care of self and our capacity to care for and act in the world” (Loke and Schiphorst in Eriksson, Höök and Shusterman et al. 2020, 4). A practice of world-making in deep recognition of the singular body integrity as a vulnerable body of interrelated becoming is from my perspective, the critical contribution made. “Life is a life within limits. Our bodies are limited by their boundaries” (Lagerkvist, forthcoming). These boundaries are fluid, established in bodily resonance. Through close contact and harmony with the other (being or artifact) “a sense of the two feeding off each other’s movements and responses” (Eriksson, Höök and Shusterman et al. 2020, 9) is experienced as our mode of existence; the essence of living a better life. In responsibly exploring this in-betweenness, the mediated space between the other and existence, we can occupy a third space; a design space through which ethical existential media can emerge.

At Krägga Herrgård I recovered through uncovering my whole relational self. Through pausing, breathing, and feeling I reconnected with my abdominal tension, strained chest, and tight hips, I became aware of my exhausted self. Provided with time and space to take notice of my tiredness, it was a pleasant experience. The shelter and support received through another person’s lift of my heavy limp established a harmony between first-, second-and third-person perspectives of my body which permeated other sensational experiences of the course; doing Tai Chi and singing with drones in resonance with each other and the technology. This ease transformed into peace through steadily upheld compassionate gestures – active listening, mutual presence, attentiveness to my daughter’s moods and needs, eye contact, sound massages, play. I feel revitalized and taken care of. It takes a village and a body to raise a child.