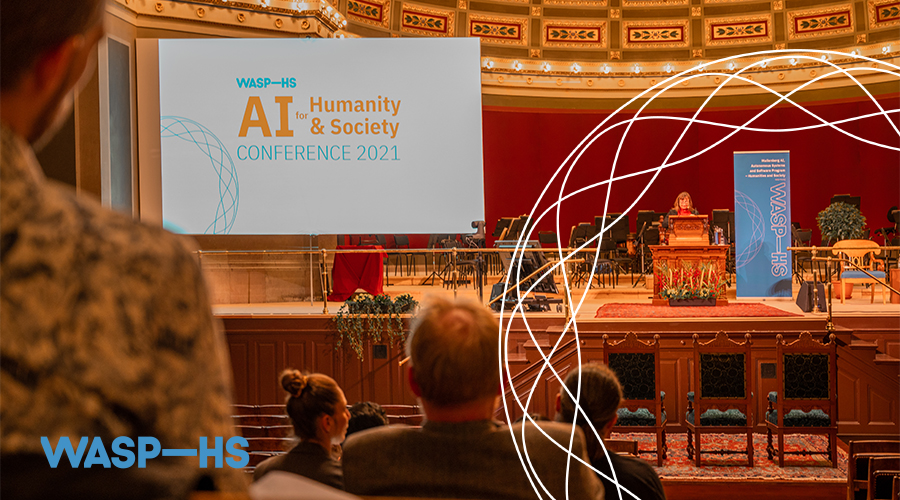 On November 18, 2021, international scholars worldwide gathered at the WASP-HS international conference AI for Humanity and Society to discuss and propose plans for reforming Sweden’s national and corporate artificial intelligence policies. The conference, with the theme “Shaping the Future of AI – The Role of Policies”, was organized by WASP-HS, a national research program on artificial intelligence, and hosted by Uppsala University. The conference is part of the annual AI for Humanity and Society series and took place both on-site and online.

“The WASP-HS has brough together such a diverse group of researchers. Even though we all condiser ouselves a part of humanities or social sciences we have such very different perspectives and beginning points of our research. Going to these types of meetings is an incredible opportunity to be able to see how the approach to the question of AI, Autonomous Systems, or in the case of micro robotics, from different perspectives both disciplinarily, and also epistemology and what that can give. So it is an incredible opportunity to expand how we think about it,” says Professor Ericka Johnsson, WASP-HS Principal Investigator.

Issues raised by the panelists were international and multidisciplinary approaches to AI policies, including definitions of trust and responsibilities, as well as suggestions of frameworks to cope with it.

At 13:00 the doors opened to the main building at Uppsala University. The on-site participants were greeted by music before Tora Holmberg, Vice-Rector, Uppsala University, and Virginia Dignum, Program Director of WASP-HS welcomed and opened the conference.

After the welcoming, the stage was given to Sangeeta Gupta, Sr Vice President & Chief Strategy Officer, NASSCOM​, and Snehanshu Mitra, Lead, Centre of Excellence, Data Science & AI, NASSCOM​, who spoke on the topic Leveraging AI for Social Good. The speakers brought an Indian perspective to the conversation.

An American perspective was brought forward by Susan Athey, Professor of Economics at Stanford University
Graduate School of Business, who spoke on the topic AI and Economic Policy for the Greater Good.

The day ended with a panel discussion with Kerstin Sahlin, Chair of the WASP-HS Board, Susanne Ackum Senior Lecturer, and Dean at Linnaeus University, and Anna Nilsson Ehle Chair, Vinnova Board. The discussion summed the previous speaker’s presentations up, and the importance of interdiciplinary approaches to AI research was emphasized.