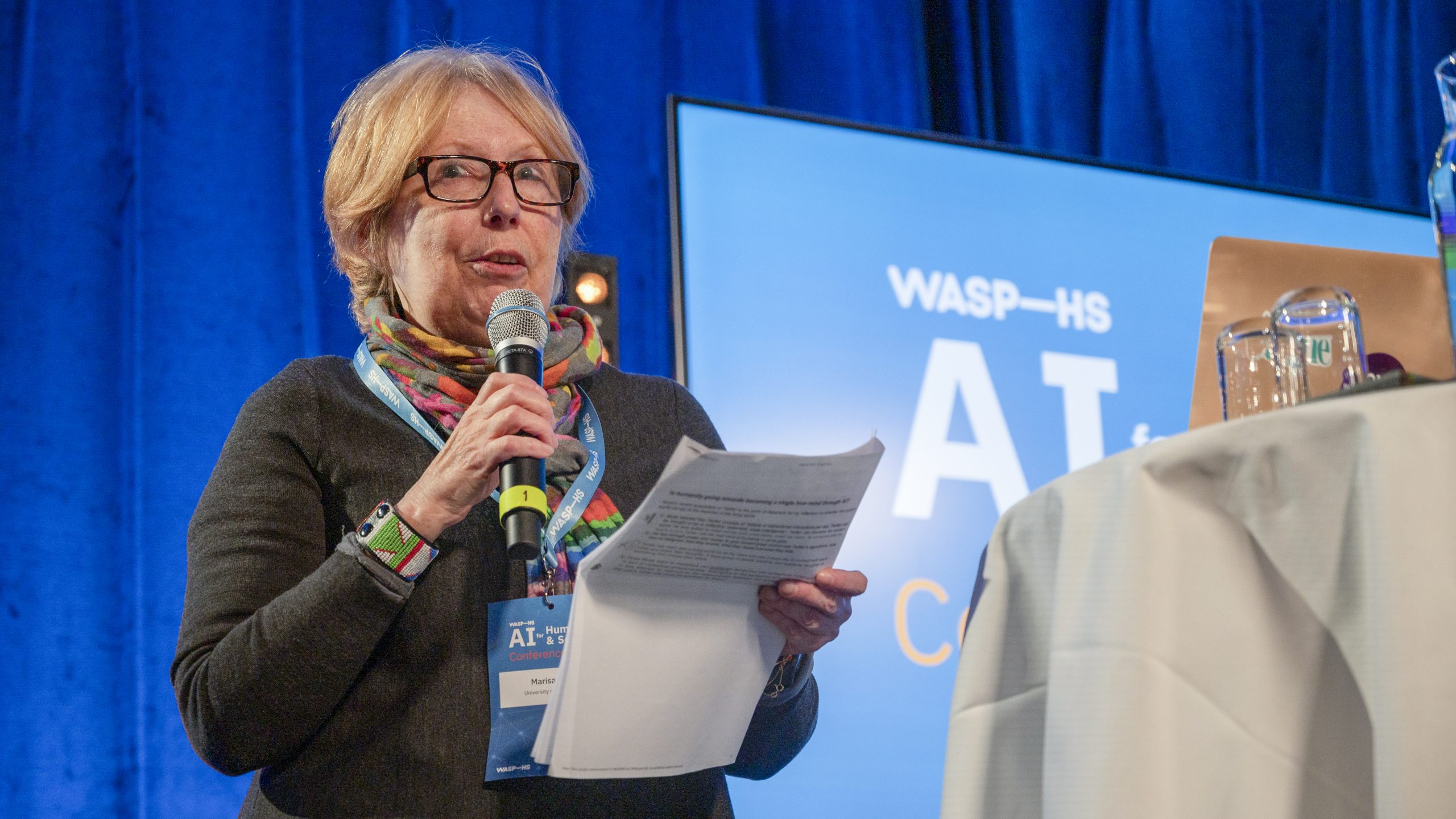 Marisa Ponti, Associate Professor at the University of Gothenburg, reflected on “is the system world going at the expense of the living world” during the session Mapping the Grand Challenges of AI at the WASP-HS AI for Humanity and Society Conference 2022, Stockholm, 17 November 2022.

In 1987, the German philosopher Jürgen Habermas developed and popularized the system world versus living world dichotomy. In a nutshell, the system world is what people have created within institutions and organizations. Money and power are essentially the driving forces behind it. Living worlds are where we interact with each other, everyday worlds we share with others. According to the Dutch anthropologist Van der Lans (2011), these two spheres are drifting apart, no longer showing meaningful overlap, and interfering with each other. Matters pertaining to government, businesses, and professional institutions are on the one hand, and matters pertaining to citizens are on the other.  In contrast, Habermas described the system world as “colonizing the living world.”

In considering Elon Musk’s recent acquisition of Twitter, which prompted my reflection on whether the system world goes at the expense of the living world, I see a connection between these two views. The two positions seem to contradict each other.  However, is Musk drifting the two worlds apart while we as humans become “colonized” passive recipients, or a bunch of “idiot savants” with a distorted view of reality?

On November 3, 2022, Musk tweeted that as it consists of “billions of bidirectional interactions per day, Twitter can be thought of as a collective, cybernetic super-intelligence”. Twitter has now become his system world: he took action for different reasons, including saving money on taxes (he is against Biden’s billionaire minimum income tax) and, presumably, enacting a vision. As someone tweeted back “he wants to turn Twitter into the hive mind of humanity in all its glory”,  Musk (2022) responded, “pretty much, or at least one of the hive minds.”

However, Twitter has also been a living world for all the people who have used (and still use)  it every day to connect with each other and share their thoughts. Millions of people tweeting their scattered thoughts on everything that crosses their minds. A question crossed my mind: does Musk want to transform our scattered behaviour into something coherent? A sort of massive collective consciousness, analogous to the behaviour of social insects, like bees? If his long-term project is to build a hive mind, in which everyone is connected to everyone else, so that we could all share our thoughts, memories, and even dreams with one another, “such a system of communication would not only have far-reaching consequences, it would also be hugely controversial” (Gallego, 2016). In nature, hive minds exist regardless of technological integration, and they are fundamentally about bringing the many together for a greater purpose. Think about bees or ants, for example. Scientists have reported that ants automatically assemble with a level of collective intelligence that could help in the development of intuitive robots that can cooperate as a group (Princeton University, 2015). Using collective intelligence to advance creativity, innovation, workflows, and uncertainty prediction has attracted decision-makers’ attention. If everyone around the world could collaborate on solutions just by putting their minds together, imagine the problems we could solve.

Now, in his attempt to restructure the relationships between Twitter and people who still use it, what role does Musk envision for us and our living world? So far, he has promised to redesign the algorithms responsible for “algorithmic audiencing”, which decide what we see in our feeds and in which order. The risk is that this goal will not overlap with other short-term goals: for example, free speech, safety, and avoiding harassment.

Is our living world going to get subsumed within the system world enacted by an overlord who has enough power, money, and data to give himself great control over Twitter’s algorithms: how they’re designed, how they evolve, what they reveal and what they hide?  Make no mistake, we had created a living world inside Twitter even before Musk arrived, and Twitter was already a system world, in my opinion. While it was far from perfect, we now have an overlord who may think that an AI-based hive mind can be the future of “democracy” since it could be the best-ever form of governance.

Interestingly, in 2015 Elon Musk and dozens of artificial intelligence experts signed an open letter calling for research into societal impacts of AI due to the risks AI entails (Hern, 2015). Now, Musk hopes that Twitter ‘super-intelligence’ can be the humanity’s hope against the danger posed by AI. The signatories of the letter asked: How can engineers create AI systems that are beneficial to society, and that are robust? Humans need to remain in control of AI; our AI systems must “do what we want them to do”. Paradoxically, despite all these good intentions, as part of a wave of layoffs, Musk fired the group working to make Twitter’s algorithms more transparent and fairer.

What do regulators think? In the overlord system world, who has access to the algorithmic functioning? The EU commissioner for the internal market, Thierry Breton, warned Musk that “there is still huge work ahead” to bring the platform in line with the EU Digital Services Act. “Twitter will have to implement transparent user policies, significantly reinforce content moderation and protect freedom of speech, tackle disinformation with resolve, and limit targeted advertising,” Breton said in a statement (Brodkin, 2022).

In writing this reflection, I have sure got ahead of myself, caught up in an image of a dystopic future.  According to Collins (2018), the greater present danger is that we lose sight of artificial intelligence’s very real limitations and readily enslave ourselves to stupid computers, and let me add, dictatorial overlords who forget about individual intelligence.  As someone tweeted “intelligence has personhood” (Kerzner, 2022). So has our living world.

Gallego, J. (2016). Becoming borg: what is a hive mind in science and could humanity get there? Futurism. Retrieved November 3, 2022, from https://futurism.com/becoming-borg-what-is-a-hive-mind-in-science-and-could-humans-get-there

Kerzner, L. (2022, November 3). Then charging people to use it is ransoming that intelligence, and therefore unethical. An intelligence has personhood. [Tweet]. Twitter. December 4, 2022, from https://shorturl.at/dqGMN