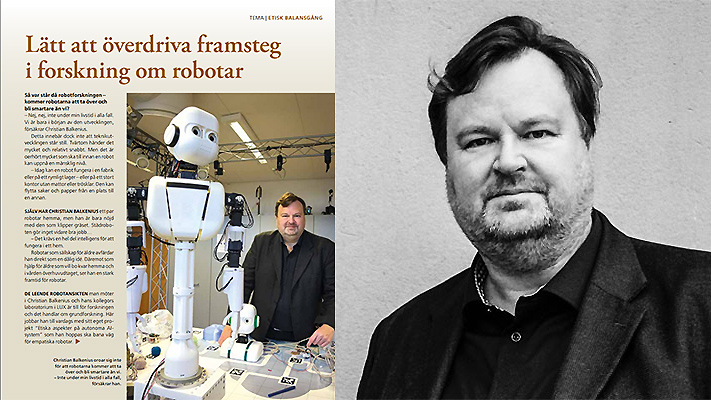 In an interview in Lund University magazine Professor Christian Balkenius, responsible for the WASP-HS research school, talks about how far robotic research has come and whether a robot can behave ethically and morally.

Christian Balkenius is a professor of cognitive science and director of the research school within the WASP-HS program (Wallenberg AI Autonomous Systems and Software Program – Humanities and Society) which will eventually employ 70 doctoral students nationwide.

This means that Christian Balkenius is a central driver for the largest investment ever in the humanities and social sciences in Sweden. In issue 6/2019 of Lund University’s magazine, he is interviewed about the new assignment as head of the WASP-HS research school and about the robotic research he leads at Lund University.

The WASP-HS investment of 660 million currently consists of 16 research projects (three of which are in Lund) and the research school. They unite in how artificial intelligence will affect us humans. The funding comes from the Wallenberg foundations, and Christian Balkenius thinks it has a special point.

“They have funded a lot of the AI research in Sweden and therefore it’s pleasing that that they now want to fund something that is about the consequences”, he says to Lund University magazine.

When asked where robot research stands and whether robots will take over and become smarter than humans, he answers:

“No, no, not in my lifetime in any case. We are only at the beginning of this development”, reassures Christian Balkenius, while emphasizing that there is a lot going on in technology development with rapid development of robots.